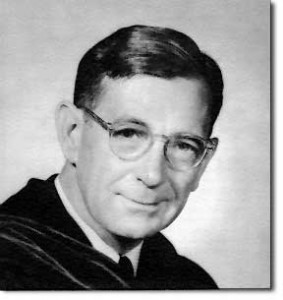 “Religion is not something separate and apart from ordinary life. It is life—life of every kind viewed from the standpoint of meaning and purpose: life lived in the fuller awareness of its human quality and spiritual significance.”

The above words of A. Powell Davies express the universality and simplicity of his religious faith. Minister of All Souls Church in Washington from 1944 until his death in September 1957, Dr. Davies rose to prominence as one of America’s most forthright, courageous liberal spokesmen. His influence was felt not only in his own church and community but reached out into national and international areas of concern. Whether it was a question of racial injustice in the District of Columbia, unfair methods of Congressional committees, or the needs of the underfed and underprivileged in Asia—he spoke out simply and courageously, reaffirming his conviction that “religion is as large as life, and it should go into all parts of life.”

Powell Davies was born on June 5, 1902, in Birkenhead, England, a suburb of Liverpool. His mother came from Penymyndd, Wales, where in his boyhood he spent many vacations on his grandfather’s farm. There in the large household he loved to listen to the family’s spirited discussions. Any and all ideas were entertained and debated, and the growing boy found stimulation for his already active and adventurous intellect. As he once said of his fellow Welshmen, “They are highly sensitive, passionate, emotionally finely balanced; poetry is natural to them. They are full of eagerness for knowledge and seem to have a natural faculty for finding the essence of things.”

Proud as he was of his Welsh heritage, Davies early was fascinated with America—its founding principles, its opportunity, and, as he foresaw, its inevitable position of world leadership. So after completing his theological studies at the University of London and a brief pastorate in a Methodist church nearby, he came to the United States in 1928 with his wife, Muriel Hannah Davies.

Always an unconventional preacher, even within Methodism, Davies, following a four-year pastorate in Portland, Maine, in 1933 became minister of the Community Church of Summit, New Jersey, where he remained for 11 years.

During the period in Summit, through magazine articles and numerous public addresses, Powell Davies became known as an astute analyst of national and international affairs. His first book, American Destiny, published in 1942, opened with the words: “Not by design, but by necessity, the American people are moving towards world ascendancy.” He developed the thesis which he continued to stress throughout his career, that America must take the leadership in a world which has become a single, vast, reluctant community. The United States, he said, “not only began with a revolution; it is a revolution, and its faith in human freedom is the only faith which can unite the world.”

His devotion to free religion and to the democratic system which it nurtured was manifest in the movement known in his words as “Unitarian Advance”:

Unitarian churches are founded upon individual freedom of belief, discipleship to advancing truth, the democratic process in human relations, universal brotherhood undivided by nation, race or creed, and allegiance to the cause of a united world community.

The Nation’s Capital: Religion in Action

In September 1944, A. Powell Davies became minister of All Souls Church in Washington, D. C. From this pulpit and in his many addresses throughout the country, he continued to champion American founding principles. He vigorously opposed racial injustice, censorship, abuses of Congressional investigating committees, persecution of public servants, the activities of Communist and pro-Communist groups, miscarriages of justice, and petty police tyrannies.

The Washington Post commented that Davies was “militantly in the forefront of every assault upon intolerance and racial discrimination and injustice.”

He was chairman of the Emergency Conference for Civilian Control of Atomic Energy. As president of Food for Freedom, he rallied national organizations in support of appropriations for the United Nations’ and private overseas relief efforts.

All Souls Church became an effective force for social action. The collection on one occasion of more than 90 tons of canned goods for overseas relief, the shipment of school supplies to the children of Hiroshima in 1947, the widely publicized pledge no longer to patronize segregated restaurants in the District of Columbia, the founding of the integrated Columbia Heights Boys Club in cooperation with the Unitarian Service Committee—all these are examples of the religion-in-action that he inspired.

He was on the Board of Directors of the Unitarian Service Committee, the Meadville Theological School at the University of Chicago, and Federal Union, Inc. He served on councils of the Planned Parenthood Federation, the National Committee for Mental Hygiene, Americans for Democratic Action, the Population Reference Bureau, and Protestants and Other Americans United for Separation of Church and State.

A longtime student and vigorous opponent of communism, he early saw the moral issues at stake and took forthright positions while many were still confused. He was equally clear as to the menace of McCarthyism, and fought it resolutely.

Meanwhile, during Dr. Davies’ ministry, All Souls Church, heir to a long and distinguished history, was experiencing its greatest growth. So many people attended the Sunday morning services that the main auditorium would not hold them all, and the overflow heard the service over a public address system in an adjoining hall. Seven new congregations were formed in the Washington area, and until they called their own ministers, four of these groups heard Dr. Davies’s sermons by direct wire.

His annual series of printed sermons was mailed to subscribers in all parts of the world, and many were reprinted in magazines and newspapers.

In addition to these activities, Davies found time to write numerous books. Man’s Vast Future: A Definition of Democracy, was translated into seven languages for distribution overseas by the U.S. Information Agency. Other books are: The Faith of an Unrepentant Liberal, America’s Real Religion, The Temptation to be Good, The Urge to Persecute, and The Language of the Heart: A Book of Prayers. With the growing public interest aroused by the discovery of the Dead Sea Scrolls, he intensified his efforts to make available to the layman the results of modern Biblical research. The two books, The Meaning of the Dead Sea Scrolls and The Ten Commandments—approximately one-half million copies of each printed as paperbacks—were followed by The First Christian: A Study of St. Paul and Christian Origins, completed just before his death. 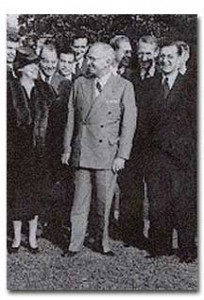 To those who were shocked by the findings of modern scholarship, Dr. Davies asked, Do we fear that the Bible will not stand investigation?

At the time of Dr. Davies’s death, the Washington Post said: “Powell Davies was at once the spiritual leader and goading conscience to his congregation—and to the whole community.”

It has been remarked that of all his many good works, perhaps the most lovably revolutionary was to make laughter a part of a religious service. “Too often,” according to the Washington Daily News, “the religious man is a bigot, the righteous man a humorless doctrinaire, the crusader an intolerant ass. Dr.Davies was certainly religious, righteous and a crusader, but he was broad minded, witty and kind.”

In a posthumous award, Americans for Democratic Action said, “He was a universal citizen.” His universality was perhaps his outstanding characteristic. “The world,” he said, “is now too dangerous for anything but truth, too small for anything but brotherhood. Our neighbor whom we must love as we love ourselves is anyone whatever and everyone whatever throughout the world.”

And in churches, too, the basis should be universal. “What a shame it is that there is anything in churches that shuts people out! For what is a church but dreams and hopes and yearnings? And what is worship but the longing of the lonely human heart?” 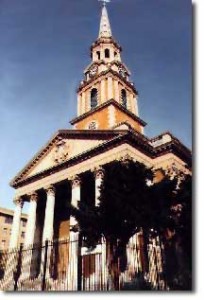 All Souls Unitarian Church in Washington, DC, where Davies was minister from 1944 to 1957

And even to those who claim to seek no God, Davies reached out a hand as a fellow pilgrim. In a sermon, “The God of the Atheist,” he quoted Robert Ingersoll, noted nineteenth-century agnostic who had affirmed, “He who loves, worships.” Davies added, “Upon such a man I have nothing to urge. Certainly no word of reproach. Nor do I have a wish to better his thinking, or improve his creed. If he will not kneel beside me, I will stand beside him.”

“Why should any of us be confined within a single area of religious culture?” he asked. “When I read Amos and Jeremiah, I say ‘Would to God I were a Jew.’ When I read the Parable of the Good Samaritan, I say ‘Would I were a Galilean.’ When I read the 13th of 1st Corinthians, I wish with all my heart that I might be a Christian after the manner of the Apostle Paul. When I think of Buddha and his Eightfold Path, I say, ‘I, too, would be a Buddhist.’ And when I remember the trial of Socrates, I say in awe but with exalted spirit, ‘Oh that I might be so brave a humanist.’ And thus at the end, there is nothing I can say but that, like Emerson and Channing, I want to live with the privilege of the illimitable mind.”

On December 8, 1957, a bust of Dr. Davies was unveiled at the All Souls Church, Unitarian, Washington DC. On the occasion, the A. Powell Davies Memorial Committee honored Dr. Davies with the following words:

“Friends: The organizations of All Souls Church, Unitarian, have joined together to place a bust of the late A. Powell Davies in this church of his greatest ministry, and thus to make the bust available to you – and to America – and to the world.

The sculptor is Jimilu Mason, a Unitarian and an admirer of Powell Davies. She shaped her image as she viewed him at his work in life. She caught for time beyond death his visage.” 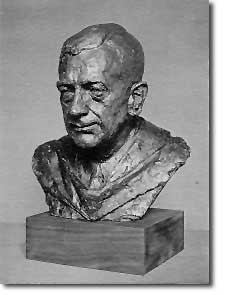 Prayers for Today: A. Powell Davies

“America’s Real Religion:” The Theology and Social Action of A. Powell Davies