Kurt Vonnegut Jr. was born on November 11, 1922. He was born in Indianapolis, Indiana to parents Kurt Sr., a renowned Indianapolis architect, and Edith, who had inherited wealth from her family’s Indianapolis brewery.

In his early years, Kurt Jr. benefitted from his family’s wealth and social status. He attended the private Orchard School where he first met Jane Cox, the woman who would later become his wife. During the Depression, however, his family faced financial hardship, and Kurt Jr. was no longer able to attend the Orchard School.

The Depression caused significant distress for both of his parents. His father fell into deep despair and his mother suffered from drug and alcohol addiction. Their difficulty coping with the Depression had a lasting impact on Kurt Jr. and his way of being in the world.

Four years after the beginning of the Second World War, at age 20 Kurt. Jr. dropped out of Cornell University and joined the U.S. Army. He was deployed to Europe and shortly thereafter the Germans took him prisoner during the Battle of the Bulge.

As a prisoner of war, Vonnegut was held in an underground facility which was previously home to a meat locker and slaughterhouse. When British and American troops bombed Dresden on February 13, 1945, killing 60,000 civilians, it was this holding location that inadvertently saved the lives of Vonnegut and his fellow prisoners.

In the weeks following the bombing, Vonnegut was forced to scour the city, collecting and burning human remains. This unimaginable experience was the impetus for his classic work Slaughterhouse-Five. On top of these horrific experiences at war, in 1944 Vonnegut lost his mother to a suicide drug overdose.

After returning home from war, Vonnegut married Jane Cox. Soon after, their first child, Mark, was born. In the coming years, they would welcome two more children—Edith and Nanette—into their family. 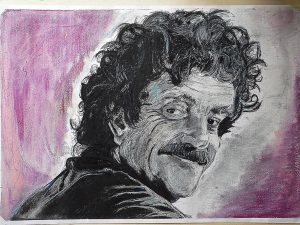 In the years following the war, Vonnegut worked for General Electric, writing short stories on the side with the goal of publication. In 1952 his first novel, Player Piano, was published.

In 1957, the Vonnegut family was forever reshaped as Vonnegut’s sister Alice and her husband both died in the space of only two weeks—his sister of cancer and her husband of a freak accident. Kurt and Jane took in three of their surviving children, and this change placed greater financial burden on their family.

Over the next ten years, Kurt published several full-length novels, including: The Sirens of Titan; Mother Night; Cat’s Cradle; God Bless You, Mr. Rosewater; and Slaughterhouse-Five. With each novel, Vonnegut’s dark comedy and sharp social critique attracted a broader following. It was Slaughterhouse-Five, however, that earned Vonnegut mass readership and worldwide fame.

In the wake of this success, in the 1970’s Vonnegut’s life turned once again toward difficulty. After raising their children, Kurt Jr. and Jane ended their marriage. Vonnegut moved as a single man to New York City, where he suffered from depression and struggled to write. The novels he did manage to write in this season, Breakfast of Champions and Slapstick, proved to be vehicles for processing his complex and heartrending experience of family.

In 1979, Vonnegut married Jill Krementz, a photographer. The 1980’s also proved fruitful for his career, with his novels Jailbird, Deadeye Dick, Galapagos, and Bluebeard published to great acclaim.

In his later years, Kurt dedicated his life to the causes of peace, freedom, and environmental sustainability. His final novel and essays, Timequake and A Man without a Country, are expressions of these commitments. Vonnegut died on April 11, 2007 as the result of a fall.

In his 1984 Ware Lecture, Vonnegut described his connection to Unitarian Universalism with characteristic sarcasm: “In order not to seem [spiritually inept] to strangers trying to get a fix on me, I sometimes say I’m a Unitarian Universalist. So that denomination claims me as one of their own.”

His father and grandfather were also Unitarians; both architects, together they designed a Unitarian church building in Indianapolis, Indiana. Vonnegut interpreted their Unitarianism, too, as a kind of obligatory religious identification. He said of his father: “he…had to have a religion, because nobody wants to deal with a guy who isn’t anything, has no religion, which means he’s just a wild man. So Father said he was a Unitarian. That was OK…You had to be something.”

Despite his blasé view of religious affiliation, Vonnegut was a deeply grounded person whose life was indeed an expression of UU values. In his Palm Sunday sermon, he called himself a “Christ-worshiping agnostic.” He was also a proud humanist, even serving as honorary president of the American Humanist Association.

To close, this quote from an interview on life and faith gives a glimpse into Vonnegut’s Christian-agnostic-humanism and its resonance with contemporary Unitarian Universalism: “Einstein’s E = mc2 is an extraordinary concept. So radical: matter and energy are two phases of the same sort of general stuff. There’s only one other idea that radical: Forgive us our trespasses as we forgive those who trespass against us.”