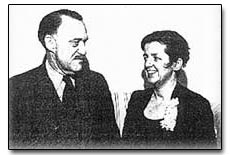 Paul Blanshard was a person of great courage and daring. His pen was his principal weapon in his fight for social justice, especially his Beacon Press books on Catholic power, but he had been a public crusader and crusading journalist for decades before his books.

Paul and his twin brother, Brand Blanshard, who became a chair of the philosophy department at Swarthmore and Yale, where he was honored as a Sterling Professor, were born on April 27, 1892. It was the same birthday as Hegel, a circumstance they both regarded‚—and often referred to‚—as a singular honor. Neither began life as the liberal crusaders they became. Their conservative parents died early, their mother in a fire on their farm in Ohio when they were one year old, followed by their Congregationalist minister father. They were raised in poverty by their stern paternal grandmother (her husband, a Methodist minister), but determined to succeed in what mattered to them, and that became the world of liberal action and ideas. They were graduated from the University of Michigan in 1914, both Phi Beta Kappa, both known for fierce and brilliant debating skills. The twins then went their separate ways, Brand to Merton College at Oxford and to ambulance driving in the First World War, then to a distinguished academic career; Paul, to an abortive stint as an ordained Congregational minister, and public witness against American entry into that war. He served at the Maverick Church in East Boston and in Tampa, studied briefly at Harvard, and then at Union Theological Seminary, but abandoned a ministerial career in theology after only two years, saying later that Christianity was “so full of fraud that any honest man should repudiate the whole shebang and espouse atheism.” In mid-life he became a Unitarian and joined All Souls Unitarian Church in Washington, DC under A. Powell Davies, but he was not personally involved in church or denominational affairs outside his own publications. He regarded himself, as he wrote, as a “social rebel” who had been transformed “from Christian fundamentalist to humanist atheist, from stodgy Puritan to sexual rebel, from doctrinaire socialist to socialist pragmatist.” (His twin, Brand, followed a parallel, if less flamboyant, course, becoming a leading Quaker and rationalist noted for his devastating books of criticism of non-reason.)

Restless for a more public and more secular arena than the ministry, Blanshard became a labor organizer for the Amalgamated Textile Workers Union, led a strike in Utica, New York, spent 30 days in jail for contempt of an anti-picketing injunction, founded the Rochester Labor College, wrote his first book, An Outline of the British Labour Movement (1923), then became field director for the League for Industrial Democracy. He toured Soviet Russia and China, and worked on and off for The Nation, exposing, among other things, conditions in Southern textile mills. After supporting Norman Thomas’s bid for the presidency, he became executive director of New York City’s Affairs Committee, which helped oust Mayor Jimmy Walker, and wrote (with Norman Thomas) What’s the Matter with New York (1932). By 1933 he was working for Fiorello LaGuardia and in 1937 became his Commissioner of Investigations and Accounts, responsible for the political demise of many Tammany officials (and for the conviction of some). After night-time study at Brooklyn Law School and a 1937 LL.B., he practiced law in New York at Arthur Garfield Hays’ firm, and, in the Second World War, served with the State Department as an advisor on Caribbean Affairs. He led a vain fight against Communist control of the city’s American Labor Party, then “retired” at 53 to begin what became two decades of research and writing on the Catholic hierarchy and ecclesiastical power, living in his (acquired for $600) farmhouse in Thetford Center, VT. 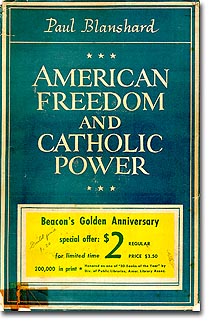 His next, and most noted book, spurred by the church’s opposition to birth control and public schools, was issued first in a Nation series in 1947-1948, and then in a Beacon Press book that made him famous but at considerable cost of public castigation. Ten publishers, a number admitting cowardice, turned down his American Freedom and Catholic Power, until the new young director of the Unitarians’ Beacon Press, Melvin Arnold, took it on. It was to begin an era of solid controversial publishing at Beacon Press. Arnold had first to take on the American Unitarian Association’s Board of Trustees in the process, some of whose members feared church retaliation in Catholic Boston (one or more trustees resigned when Arnold won endorsement of his freedom to publish). After exhaustive vetting by scholars, the book was published in 1949, its thorough research never overturned despite rigorous public onslaughts led by the church. Even many Protestant leaders and journals failed to review or praise it, though Eleanor Roosevelt, Archibald MacLeish, John Dewey, Reinhold Niebuhr, and Albert Einstein did. The book (and The Nation) were banned from New York schools; copies were mutilated in many public libraries and the book was put on the Roman Curia’s Index of Prohibited Books.

Most media, including The New York Times for ten years, refused all advertising and few reviewed it favorably or at all. Nonetheless it became a bestseller and eventually made the bestseller lists after Cardinal Spellman’s public attack on Eleanor Roosevelt; it sold more than a quarter of a million hardcover copies. His next book, Communism, Democracy, and Catholic Power (1951), was also a bestseller; it was followed by The Irish and Catholic Power (suggested to him by an Irish Jesuit) and Freedom and Catholic Power in Spain and Portugal. Years later, when Blanshard was studying at the Vatican Library, a number of Catholic scholars told him privately that his books told things about the Catholic Church the way they are. Their praise delighted him more than the often lukewarm support of many liberals offended by his bold and uncompromising style.

Blanshard published a number of other books later (15 books in total over the years), including The Right to Read (1955) on the First Amendment, God and Man in Washington (1960), and Personal and Controversial (1973), an autobiography. His second wife, Mary Hillyer Blanshard, also a courageous labor activist and socialist, was the first official Unitarian presence in Washington, D.C. in the l950s. She died in Vermont at their home on Sawnee Bean Hill in 1965, he in St. Petersburg, Florida in 1980 at 87.

Paul Blanshard was a man of inexhaustible energy, spirit, and nerve. His courage and that of Beacon Press changed the timid climate of journalism and publishing; by the 1960s no media were afraid to criticize the Roman Catholic Church or any other institution or any demagogue.

Both Paul and Mary Blanshard have spent most of their lives in the midst of controversy. From the 20s when they worked as “organizers” in the hazardous early days of unionizing, through their exposing of rackets in New York City and the storm center which erupted when Paul Blanshard took the Catholic Church to task for its infringement on the separation of church and state, they have successfully run the difficult course of political, social and religious liberalism.

The granddaughter of Alexander Pope Wilder, president of the Kansas Universalist Convention, and niece of Louis Parkhurst, one of the donators of Star Island, Mary Blanshard has deep roots in the liberal tradition. Born in Brooklyn in 1902, she moved to Kansas at an early age. With no Unitarian or Universalist church school available, her mother enrolled her in the Presbyterian church. Her mother’s one admonition, Mary adds with a smile, was to remember that, “What you hear there isn’t Truth, The Truth is Unitarian.”

Returning to New York in 1920, she became actively involved with the League for Industrial Democracy under Norman Thomas and was arrested more than once for her efforts with the unions. It was during this time she met Paul Blanshard, the Education Director for the League.

Mary Blanshard was Executive Director of the Unitarian Fellowship for Social Justice in Washington. She has been a member of many political and religious groups, YWCA Commissions and peace and civil rights organizations. As a result of her experience in Washington, she comments on the lobbying of religious organizations. “For the Catholics, Jews, Unitarian Universalists, Methodists, etc. all to have separate organizations for Congressional hearings is highly inefficient. The effect of a single religious representative body testifying on certain issues would be much more powerful than the disunited, scattered efforts we have now.”

Both Mary and Paul Blanshard have definite ideas about what the Unitarian Universalist must do to survive and flourish in our age. They feel that the issues of war or peace, a solution to the race question, and the separation of church and state in that order are the most critical issues facing the world today. However, while all men and all religions must be concerned with the first two, they feel Unitarian Universalists are especially fitted to defend our basic constitutional guarantee of religious freedom.

They see our role even more clearly since “most Protestant leaders are much too soft on certain aspects of Catholicism. The Church is still driving the world over for public money for its institutions, fighting the rights of divorce and birth control, and actually engaged in censorship. These issues are not being faced squarely.”

The Blanshards do not belittle the new ideas and relatively progressive bishops pushing for reform, but they do emphasize that there is a double effect to the ecumenical movement: the progressive liberalizing of the Catholic Church, as well as the conservatizing of the Protestant denominations.

A few years ago, after the Blanshards had toured around the world warning of the dangers that would arise if the separation of church and state were not maintained, they returned to their home in Vermont to find New England evangelicals conducting classes in the local public schools. After notifying the State Commission for Education and having the practice stopped, Paul adds ruefully that his political career in Vermont is prematurely ended, since he is known “as the man who put the Evangelicals out of the schools.”