John H. Morison, born in Peterborough, New Hampshire in 1808, was a graduate of Harvard College and Divinity School whose distinguished service as a Unitarian minister led to his being honored by Harvard University with the degree of Doctor of Divinity in 1858. Among the later descendants of this long notable family are three twentieth century brothers: Robert, Elting, and John. Each has made a contribution in separate fields of science, technology, and society in relation to practical affairs. Below we explore the life of John Hopkins Morison III. 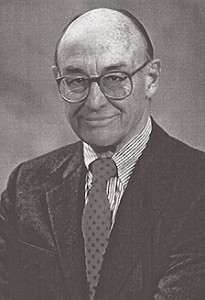 John (Harvard 1935) once jokingly described himself as “the youngest brother who stayed home to make money so my older brothers could think lofty thoughts.” But in fact, John Morison has been one of the more creative entrepreneurs and technological innovators in modern American life. After spending several years in Brazil and in the U.S. Navy in World War II he returned to New Hampshire to take over, with his father, an insolvent foundry in an effort to restore the industrial economy of that state after years of suffering in the depression and World War II. In the course of his lifetime, he transformed the Hitchiner Manufacturing Company into a multinational corporation, known as a “best practice” firm because of the sophistication of its technologies and its extensive worker education and participation programs. While their basic process is still the “lost wax,” technology described in the Old Testament, they do admit that they have added a “few new wrinkles with the help of our friends at MIT.”

Nineteen thirteen seems to be dropping farther into the distance, but it is still the year of my birth, the last of three sons all born in Milwaukee. Presumably the difficulties of raising a family in such a sooty, urban existence had already been discovered to be insurmountable, for shortly thereafter we removed to the distinctly sub-urban life of South Milwaukee where some three acres of land, ponies, cows and vegetables offered the wholesome opportunity which growing boys obviously required. Such a happy existence lasted for eleven years when the cycle alternated again and soot and urbanity returned to favor when the need for ‘better schooling’ took preference over the happy life which beach, ravine and park afforded around South Milwaukee.

When the time came to move on, there seems to have been no question of where it might be, that matter had long since been settled in everyone’s mind with that minimum of argument which tradition imposes. Fortunately of the same mind, I quite happily became the youngest of three brothers all at Harvard in the fall of 1931.

They were happy years in a world otherwise depressed, but by the time they were completed in 1935 commercial enterprise again inquired for new blood and I entered the field in which I was most interested, that of foreign trade, in the Export Department of the Bucyrus-Erie Co. in South Milwaukee. In 1939 I began what turned our to be ten years of travel, interrupted only by a two-year tour of Florida duty with the Navy during World War II. A short trip to Mexico followed by Brazil started me out in the business of export living. It was nearly five years before I returned to this country. Constant travel over the entire country with more restful interludes in my apartment in Copacabana were a near perfect existence for a bachelor in his twenties.

The early years of the war changed it but slightly for I left the business of selling machinery for a private concern to enter the field of operating it for a governmental affair, the Metals Reserve Co. We were engaged in the development of an adequate supply of mica and quartz crystals from the interior of Brazil. In 18 months it grew from two of us to two thousand, after which I left its political involvements for the apparently more dangerous, but less complicated, life of a Naval officer. I served out the war in a far pleasanter post, at a Naval Air Station in Florida.

I returned with many things from Brazil, but none could ever provide me with the joy and happiness which have been brought into my life by Olga, the last of whose eleven names is now Morison. The virtues of genetic mix are perfectly shown in this rare combination of French, Portuguese, Spanish and Irish which has made me realize how much straight Yankee lacks. A Brazilian from the tropics who has accommodated herself to the physical and mental rigors of a New England existence while bringing charm and beauty from her own country, she has earned her honorary degree.

We were married in 1944 in Peterborough and returned to Florida and the Navy for two years. In 1946 I went back to the Bucyrus-Erie Company and to Brazil for a year.

After much mental struggle we came back from several months in Brazil in 1949 to venture our personalities, our savings, and our welfare in a return to New Hampshire manufacturing and a home in Amherst, N.H. We left the security of the corporation pension plan for the dangers of trying to shore up a shaky company making precision castings. We are now finding what is required in such independent enterprise, the responsibilities and the satisfaction of achievement. It is not hard to see why the venture spirit symbolized the New England of a hundred years ago.

The Biography of Robert Swain Morison

The Biography of Elting Elmore Morison