Biography of John Holmes
By Doris Holmes Eyges, Widow of the Poet 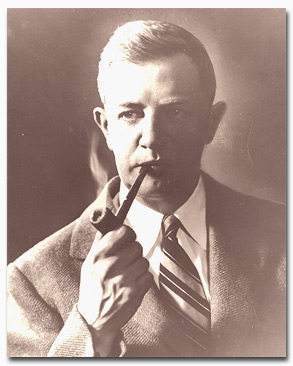 John Holmes, member of the First Parish in Cambridge, Harvard Square, was a poet. The record is there in the published volumes of his work. After Along the Row, based on his undergraduate days at Tufts, Holmes’ first major publication was Address to the Living, which came out in 1937 with the only blurb Robert Frost ever wrote. Much of Holmes’ humorous and light verse appeared in The New Yorker and was collected in Fair Warning in 1939. Map of My Country, from 1943, when the U.S. was at war, was adopted by the Navy for inclusion in the libraries of its ships and stations. Copies that survive in second-hand bookstores or personal libraries often have water stains or pages rippled by dampness. Unitarian Universalists familiar with Hymns for the Celebration of Life can find four hymns whose words are poems of John Holmes from the thirties and forties. The Double Root, 1950, The Symbols, 1955, and The Fortune Teller, a National Book Award nomination 1961, were all books of his own poems. He also produced textbooks, anthologies, and books of literary criticism. 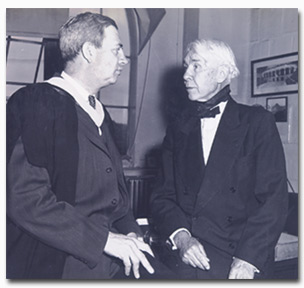 The greatest contribution of John Holmes, however, may have been the extraordinary impact he had on the lives of other poets. As a college teacher, of course, he influenced his students. His lifelong profession of poetry at Tufts resulted in the remarkable loyalty of hundreds of graduates. Holmes brought distinguished living poets to the Tufts campus long before poetry readings and poets-in-residence became a standard feature of academia. He organized workshops, summer conferences, adult education courses, but maybe even more important, parties, late night conversations, morning coffee—for poetry, poetry, poetry.

Holmes was a charismatic man, tall, quiet, pipe-smoking, tweedy, serious. Dozens of people wrote that John Holmes meant something to them that mother, spouse, child, psychoanalyst could not equal. At the time of Holmes’s death in 1962 hundreds of letters of sad tribute arrived from eminent writers, from modest neighborhood housewives, from Tufts students. In the larger world of literature, he was a powerful encourager of poets. John Ciardi, Anne Sexton, Maxine Kumin, George Starbuck, Philip Booth are some of those who record their gratitude to him. Uniquely free of competitiveness, John Holmes simply loved to have poetry happen. In the Boston area he was unmatched as an enabler of poetry in the mid-twentieth century.

John Albert Holmes, Jr. was born in Somerville, Massachusetts, on January 6, 1904, the eldest of four children of John Albert Holmes and Mary Florence Murdock Holmes. The senior Mr. Holmes was a civil engineer who built dams and bridges in New England and the South. Both parents came from old New England families. Mr. Holmes, an amateur genealogist, traced the records carefully to seventeenth century English settlers in Braintree, Massachusetts. 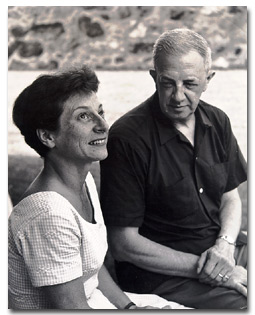 John Holmes, the poet, used the simple form of his name. He went to public elementary and high schools in Somerville. At his high school graduation the speaker was the president of Tufts College, John Cousens. Impressed by the young man who read his own poem at the ceremonies, Cousens persuaded him to attend the college on the hill nearby in Medford. After graduation from Tufts in 1929, Holmes studied at Harvard and then taught at Lafayette College in Easton, Pennsylvania where one of his colleagues, a contemporary and friend, was the poet Theodore Roethke. There, too, he met his first wife, Sarah Frances Ludlow. A job opened at Tufts and the young couple moved back to Massachusetts in 1934.

These were busy years for the teacher/poet. He wrote every day. His habit was to start with letters, and then proceed to the real thing, the poem of the moment, as a four finger typist. Invitations came to give lectures, and to review books.

For eight years Holmes served as poetry editor of the Boston Evening Transcript. A particular chum there was Howard Mumford Jones, Harvard English professor specializing in American Literature. During a spell when Holmes had a scarcity of books of verse to review, he and Jones decided to make up a poet. They took the middle names of two secretaries and concocted Preston Gurney. Holmes would refer to him in a column, or compare the fictional Gurney with some actual versifier being reviewed. One day Holmes was in Goodspeed’s book shop under the Old South Church. A clerk took a book down off the shelf and handed it to him saying, “You write so much about this poet I figured I should set this aside for you.” Holmes thought Jones was going to an awful lot of trouble to play this joke on him. But, no, it was a slim volume published about 1900 by Preston Gurney. Here began a saga that included detective work and the discovery that the real Gurney had been a Baptist clergyman, a prominent graduate of Brown University. The story was told many times and at virtually every occasion someone in the audience said, “My mother’s maiden name was Gurney,” or “He lived in Wollaston,” or “look up at that window,” the last being a stained glass memorial to Gurney in a chapel where Holmes was recounting the accumulating narrative. 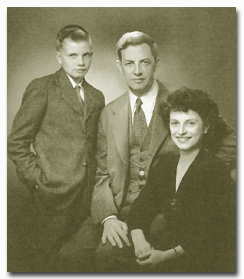 John and Doris Holmes with their son, John Ludlow Holmes.

Stained glass was an interest of John Holmes. He became a fan and friend of Charles Connick whose Boston studio was the source of many beautiful church, school, hospital, and library windows from the Arts and Crafts period onwards. Once every year John Holmes would take his poetry class to visit the studio. The Connick Stained Glass Foundation is mounting an exhibition at Boston University in 2002.

In 1936 John Ludlow Holmes was born to John and Sarah Holmes. For Holmes, family was more than sentimental attachment. It was mythology, part of the substance that generated the workings and the products of the imaginative life. The young child, his sounds, his shining blond hair, the new consciousness in the world, became poems. In the more informal realm of family correspondence Holmes was a daily, prolific, detailed and humorous writer. He wrote to newborns describing what they were getting into, to mothers-in-law savoring their special insights, to little girls, addressing their fantasy playmates. Sixteen years of weekly letters to his brother survive.

Sarah Holmes died in 1947. A year later John Holmes married Doris Vivian Kirk, a young colleague in his department. Evan Kirk Holmes was born in 1950 and Margaret Nash Holmes in 1954. A rich, full season for the poet came during what was to be this last decade of his life. 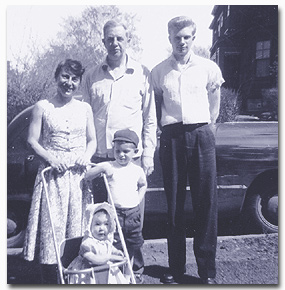 Holmes with wife Doris, and John, Evan, and Margaret.

Four times Holmes was the commencement Phi Beta Kappa speaker: at Tufts, Brown, William & Mary, and Harvard. For Harvard’s ceremonies in 1956 he composed a strong original piece called “The Eleventh Commandment.” He served as president of the New England Poetry Club and was an active member of the Academy of American Poets. He judged contests, such as the Shelley and Lamont awards. He directed summer writers’ conferences at Chautauqua, New York, at Tufts and the University of New Hampshire. Holmes was elected to the American Academy of Arts and Sciences, and he was awarded an honorary degree by Tufts University.

More intense than the public associations were two poetry workshops that grew up around John Holmes. The first began in 1949. Its regulars were John Ciardi, Richard Eberhart, May Sarton, and Richard Wilbur. They met in each other’s homes to read, analyze, and criticize their current poems. Not surprisingly, such vigorous creative people manifested very different personalities that sometimes clashed. Ciardi had been a student of Holmes at Tufts and was a bit edgy in his determination not to show influence or dependency on this father figure. Ciardi had a very masculine orientation toward poetry. Teaching at Harvard, this son of immigrants had been a gunner in the Air Force in World War II. He had little tolerance for the sweeter lyrics of May Sarton, product of European education after schooling in Cambridge where her father was a Harvard historian of science. Eberhart of the round cheeks and sunny countenance enjoyed self-contained confidence in his poems that had already moved from aerial bombardment to sailing in Maine. Wilbur was a prize-winning maker of beautifully formed poems that evoked everything from art history to the nuances of married life in the mid-twentieth century. But Holmes was the generous arbitrator who kept it all going till jobs or life changes resulted in geographical moves. 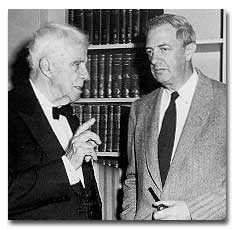 In 1958 the intellectual and stylistic modes of poetry had changed markedly to a more candid, less celebratory idiom that was soon to develop into revolutionary confessional language. John Holmes was once more the father of a small workshop that included Samuel Albert, Maxine Kumin, Anne Sexton, George Starbuck. Perhaps the two women, both winners of the Pulitzer Prize, were best known, but this group of five along with the writers in the earlier workshop produced well over a hundred books, most of which received praise from eminent critics and other honors. Memoirs or biographical writings about these poets, as well as those of the earlier workshop, record the joyous, pallid to fiery, negative and positive criticism of the members, but they are uniform in their recognition of the encouragement of Holmes.

In 1999 Tufts University put on a splendid day of celebration of the opening of the John Holmes collection in the Tisch Library. A generous gift from an alumnus, Winslow Duke, had resulted in a professional ordering of books, papers, albums, photographs and other memorabilia. On a bright day in September, family, friends, poets, librarian as well as the President and Provost of the University participated in a chapel program and a poetry walk where fans and descendants read poems of John Holmes at sites connected with the writing. One of those was the rock on which John Ciardi had placed a memorial plaque quoting a line of John Holmes that expresses his love of life, literature and that place:

This is this world, the kingdom I was looking for. 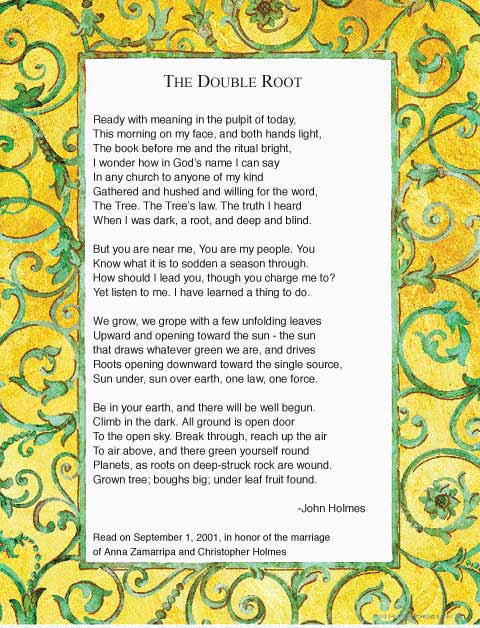