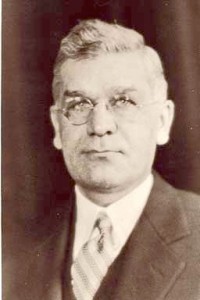 Skinner was the great Universalist social prophet of the twentieth century. He was born in Brooklyn, New York on March 23, 1881. He grew up in a family of actors and theater people. His father, who was a reporter, also wrote plays and was a drama critic. Young Clarence took part in plays at Erasmus Hall High School, and also at St. Lawrence University, where he started in the fall of 1900. Skinner was also active in the Universalist Church in Canton, New York, where his classmate Clara Ayres played the organ. After they graduated in 1904, Skinner was leaning towards the ministry as a career, and he went to work at the Universalist Church of the Divine Paternity in New York. He was in charge of the Sunday School and youth programs. He also attended programs at the University Settlement, and eventually taught classes there in current events. Skinner was ordained in New York on April 8, 1906, and accepted a call that summer to the Universalist Church in Mt. Vernon, New York. That fall he and Clara were married.

Skinner’s ministry in Mt. Vernon was a success, as a building was erected, and the church school prospered. He continued to be involved in the University Settlement, and also finished an M.A. from St. Lawrence. Soon thereafter John Haynes Holmes was settled in New York, and he and Skinner became friends. They agreed that the church must broaden its orientation toward reforming all of society. At this time congregations were taught about many of the social injustices of the day, and public forums became popular. Christians across the country were applying Christ’s teachings to the social problems of the day calling it the Social Gospel. This reform impulse was spearheaded in the Universalist denomination by Skinner. In 1910 Skinner helped form the Universalist Social Service Commission, and served as secretary for six years. The following year he left Mt. Vernon to accept a call to Grace Universalist Church in Lowell, Massachusetts. Here, in a community where the industrial revolution had started, Skinner had more first hand experience in dealing with social problems. He tried to bring labor and management together for discussions and sponsored many forums. He was also named president of the Massachusetts Universalist Sunday School Association. Then in 1914 he was appointed to the new position of Professor of Applied Christianity at Crane Theological School at Tufts. This was the beginning of a long relationship with Tufts. Although some were concerned about Skinner’s social radicalism, he was a popular teacher with the students. After he was there for only a year, his major work on The Social Implications of Universalism, was published (1915). Here Skinner wrote, “The true social objective is the perfecting of human character by the progressive improvement of those conditions and environments which are within the social control.” (Skinner, Social Implications, p. 33)

In 1917 the denomination approved a Declaration of Social Principles that Skinner had written. That year was a difficult one for Skinner, as his stand against World War I and his avowed pacifism was unpopular with much of the campus. After the war he once again joined forces with Holmes, when together they formed a Community Church of Boston, similar to Holmes’s venture in New York. Both believed that the church must move beyond sectarian boundaries, and serve the broader community with a ministry that addresses social problems in the world. Organized in 1920, Skinner remained there for seventeen years as leader.

During the 1920’s Skinner was especially active in the defense of Sacco and Vanzetti, who he felt were unjustly convicted of murder based on their political radicalism. In 1929 Skinner was made vice-dean of Crane, and then Dean Lee McColllester resigned three years later. There was some opposition to Skinner taking the position, but finally he received the appointment. He continued to teach during his term of twelve years as dean. The school also continued to grow and improve academically. After the stresses of World War II, and ill health, Skinner decided to resign from his position. He died four years later on August 26, 1949. After his death many of his ideas on worship and spirituality were gathered from previously unpublished material in Worship and the Well-Ordered Life (1955). His teaching and writing in addition to his concern for social justice, also contained a vision for a new Universalism as a religion of universals transcending all particulars, and some of this was articulated in Religion for Greatness (1945). Like his famed nineteenth century predecessor Hosea Ballou, Skinner saw salvation as only possible when the entire world is saved, and not isolated individuals.