Sandra Mitchell was born on January 12, 1935 in Longview, Texas. She graduated early from high school at the age of sixteen, and began college at the University of Texas, Austin, graduating with a Bachelor of Journalism. She said of her college career “[w]hat mattered to me was not grades, but the sheer delight of sampling the great smorgasbord of subjects.”[2] In 1955, she married Joe Caron. 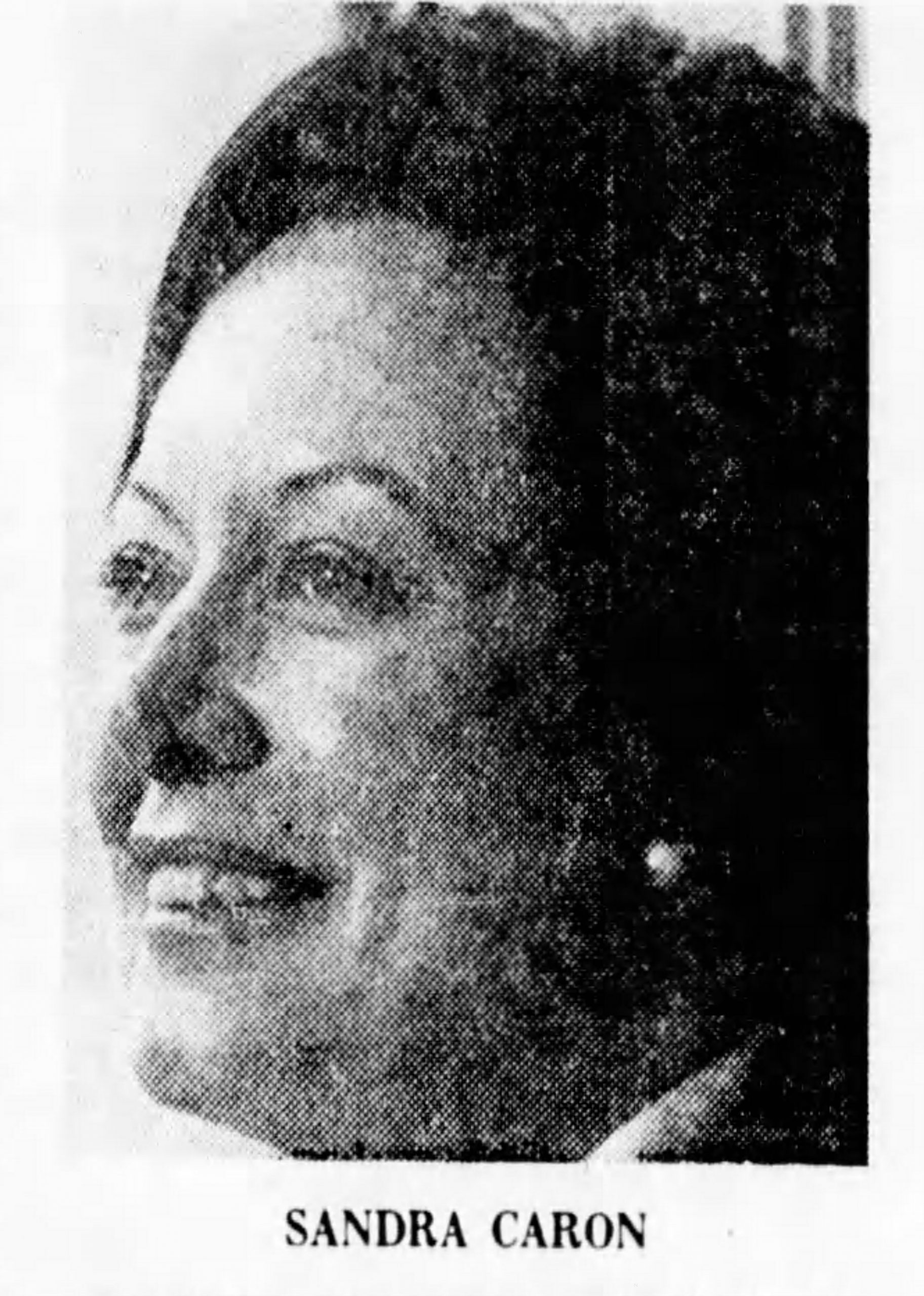 Caron graduated from New York University with a Doctor of Jurisprudence in 1972 and began a highly successful career in government law. Caron served in various roles including the Deputy Superintendent of Banking for New York State, and the Assistant Council for the New York State Department of Commerce. In March of 1977, her hometown newspaper, the Longview News-Journal in Longview, Texas, carried the story of her installation as Assistant Transportation Commissioner for Legal Affairs for the State of New York Transportation Department. Caron was 42 years old and was paid $34,333 a year—the same as her male predecessor. Only three months later, Caron would be elected Moderator of the Unitarian Universalist Association.

Sandra Mitchell Caron’s involvement with Unitarianism began in 1957 when she and her husband, Joe, joined the Unitarian Church of All Souls, (now All Souls NYC) in New York City. Caron was very active at All Souls and served on the Metropolitan New York District Board as well, which led to her being elected to the Board of Trustees of the Unitarian Universalist Association.

As moderator, she spoke often at congregations around the country, and she did not limit herself to matters of church governance. Speaking on the occasion of the 75th anniversary of the First Unitarian Church of Pittsburgh, Caron talked about the increased acceptance of spirituality in Unitarian Universalism. The Pittsburgh Post-Gazette quoted Caron:

“Unitarians can talk freely about race, sex, and politics, but the spiritual, the transcendental, embarrasses them,” Mrs. Caron said. But there are changes. “We find people much more willing to be contemplative. There is more of a wedding of the rational and the aesthetic. It’s a process of maturing towards a wholistic religion” she said.[3]

Longtime Unitarian Universalist Association Executive Vice President, Kathleen “Kay” Montgomery remembers Caron and her impact on the moderator role. “The role was never the same after that,” according to Montgomery. “There was a big shift. Sandy was a lawyer looking to do something significant [with the role] and leave a mark.” Gini von Courter, a former moderator, remembers Caron as the prototypical “iron fist in a velvet glove.” [4]

Sandra Mitchell Caron’s contributions to the role of UUA moderator were significant, but perhaps equally significant was her run at the UUA presidency in 1985. To say that a run by a woman for the presidency shook up the white male patriarchy that traditionally ran the Association is an understatement. Gene Pickett, then president, who worked with Caron in her role of moderator, refused to endorse her candidacy, instead backing Bill Schulz, the candidate who was not only male, but an ordained minister—the traditional path to the presidency. Kay Montgomery relates that “Sandy and Gene had a terribly rocky relationship. Gene’s Berry Street lecture [in which he referred to his personality clash with Caron]—not everyone appreciated that he mentioned his relationship with her as moderator.”[5]   John Buehrens, with not a little understatement, writes “When Pickett’s term of office ended in 1985, the election to succeed him was rather awkward.”[6]

In 1987, Gene Pickett delivered a Berry Street lecture in which he made clear his objection to Caron had to do with what he considered his territory as president. She wanted a say in programming, which Pickett regarded as his purview. He relates, “This was an area where I felt the Moderator and I differed in significant measure. While my differences with her did not affect my over-all relationship with the Board, there were a source of tension and stress for me. Though Sandy had supported my being appointed President and did support most of my initiatives, our personal relationship deteriorated over the six years, and this, for me, was one of the most difficult and unfortunate aspects of my Presidency.”[7]

Pickett went on to admit his discomfort with Caron’s candidacy. “The period of the presidential campaign, with Bill and Sandy running hard races, was a difficult time. It was hard to maintain even the appearance of public neutrality.”[8] In other words, the president Caron worked by side-by-side did not just remain neutral—which would have been the diplomatic thing to do. Pickett publicly and repeatedly endorsed her opponent, a white male minister.

“Awkward” to the members of the patriarchy accustomed to smooth smoke-filled backroom politicking it may have been, but awkward or not, the election garnered nationwide attention. The Asheville Citizen-Times reported the day before the election that “[b]oth candidates for the powerful position announced that they were running in the fall of 1983 and have been raising fund [sic] and making joint appearances throughout the United States and Canada ever since.”[9] The UPI wire service story, as carried in the Tyler Courier Times in Caron’s home state of Texas, reported that Caron and Schulz “…waged a polite but intense campaign for the presidency of the 176,000 member organization.”[10]

“Intense” is a good word for the historic election, as Caron’s candidacy put pressure on the opposition to include women in power. Buehrens writes “[w]hen running for president against Sandra Caron, Schulz had announced that, if elected, he would appoint Kay Montgomery, a former administrator of the Unitarian Universalist Congregation of Atlanta, as his successor in the role of executive vice president.”[11]

The election was held at the Twenty-Fourth General Assembly in Atlanta, Georgia. Shirley Chisholm and Andrew Young were featured speakers. News of the election and of Schulz’s victory was picked up by the wire services and reported across the country. Schulz defeated Caron by a 2:1 margin, 1,448 to 746. It would be another four decades—June 2017—before the Unitarian Universalist Association would elect a woman president in the person of Susan Frederick-Gray.

Sandra Mitchell Caron’s career was far from over, either in the Unitarian Universalist Association or professionally. She represented the UUA at the United Nations Conference on Women, held in Kenya in 1985. She also helped to reorganize the Clara Barton Camp into the Barton Center for Diabetes Education, Inc.

[Sandra] was the first moderator who had a vision of doing the work all the time, instead of at Board meetings or General Assemblies. She was the first Moderator who had the audacity to demand a travel allowance and …. she was hilariously funny…. I can remember sitting down there where you are, absolutely fascinated and raptly attentive.”[12]

Montgomery, Kathleen. In discussion with the author, July 28, 2020.