Society for Propagating the Gospel among the Indians and Others founded 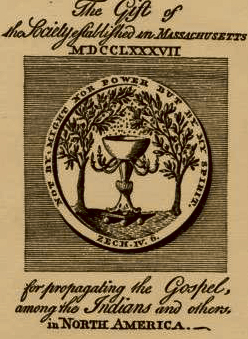 The Society’s object was “the dissemination of Christian knowledge, and the means of religious instruction among all those, in their country, who were destitute of them.” The goal was to “civilize and Christianize” Native Americans, as well as economically disadvantaged whites and, after the Civil War, African Americans.  The Society assumed that assimilation into mainstream white culture was morally improving.  When writing the history of the Society, Samuel Atkins Eliot noted that many of the original members were liberal Christians who later declared themselves Unitarian after the split in the Congregational Church in 1819.